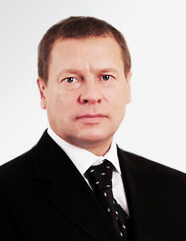 Chairman of the Board of Directors

Igor V. Zyuzin has been the Chairman of Mechel PAO's Board of Directors since July 2010.

In the period from October 1993 to December 1997, Igor Vladimirovich held the position of Director of the representative office in Moscow of Kuzbasskaya Central Processing Plant OAO and he was the Deputy Director of this enterprise from January 1997 till December 2003.

In 1987 he worked as a mining master. In 1989 Mr. Zyuzin became an assistant of section chief and acting chief technology engineer. In 1990 he was appointed deputy director for commerce and external economic activities, and in 1991 – Commercial Director at the Raspadskaya Mine in Russia’s Kemerovo Region.

Mr. Zyuzin has 30 years of experience in the coal mining industry. He has a degree in technology and complex mechanization of underground mining from the Tula Polytechnic Institute. Mr. Zyuzin also has a degree in mining engineering economics and a Ph.D. in technical sciences relating to coal mining.