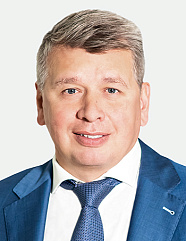 Oleg V. Korzhov has been holding the position of Mechel's Chief Executive Officer since January 2014.

Previously, Oleg Korzhov was Mechel's Senior Vice President for Economics and Management from October 2011 to December 2013.

From April 2009 to October 2011 he was Mechel’s Vice President in charge of business planning and analysis.

Since July 2008 to April 2009 he had the position of Deputy Chief Executive Officer for economy and finance of Mechel Management Company OOO.

Prior to that he was working as Director of the Economy and Planning Department at Mechel Management Company OOO for two years.

From 2005 to 2006 Mr. Korzhov was Director for the Economy and Planning Office Mechel OAO.

He was employed Director for economy and finance at Nizhnetagilsky Metallurgical Plant (NTMP) of Evrazholding Company OOO from 2003 until 2005.

Since 1995 until 1997 he was Deputy Chief Executive Officer for economy and finance Nikoremstroy OAO (NTMP OAO’s subsidiary).

In the period from 1993 to 1995 he worked at various positions at Nizhnetagilsky Metallurgical Plant named after v. I. Lenin.

His latest position was the Head in the Bureau of Economy and Finance.

In 1993 he graduated from Urals Polytechnic Institute named after S. M. Kirov with the degree in economy and management in metallurgy.

In 2002 he had his post-graduate education in the Academy of National Economy under the Government of the Russian Federation with the degree in general management. PhD in Economy.